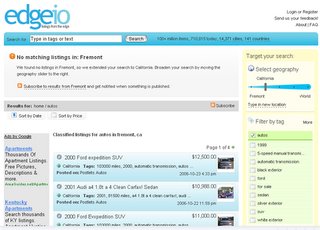 Keith Teare and his team have been pretty busy lately. They have just concluded their Series A led by Intel Capital in which $5m was raised and they have recently launched - in beta - their Chinese version of Edgeio. This is called mulu100.com - in Chinese this means catalogue of catalogues.
Edgeio's vision is to bring together, organise and distribute the world's marketplaces by aggregating on-line listings and presenting them through a single interface.
Today it has over 3000 publishers featuring over 100 million listings from 14000 cities in 130 different countries.

Edgeio also confirmed that its patents, provisionally filed in October 2005, have now been completed as full filings. These patents cover its distributed marketplaces architecture and many of the egdeio features.
Posted by Unknown at 6:49 am