Imbibing the spirit of the Valley

From Tuesday, for the rest of the month of June, I will be based in San Francisco. I am hoping that by stretching the day, it will be business as usual for me in the UK (except for face to face meetings) while I meet with partners, entrepreneurs, VCs, Angels, bloggers and folks at Stanford.
Already, the openness and generosity of spirit of people I hardly know has been very encouraging. Rob Young at First Round Capital has offered me a place to camp; Scott Rafer, Lance Cottril and others have made a number of key introductions and the diary is filling up.
TAG does have a number of investments on the west coast and naturally visiting them and meeting with some of the great co-investors we have there will be enlightening.
The companies based on the West Coat (incl 2 in LA) are: Mashery, Lookery, Spotrunner, 60 Frames,OpenX and Academia.
In addition Zemanta and Dothomes have recently made strong forays into the markets there and are considering establishing presence.
There is much to read about the ecosystem that has been developed in the Valley and many other cities are attempting to emulate that special 'sauce' they apparently have. I figured a month may give me some insights.

[A really interesting book dealing with the PRE-web period which describes the way in which Silicon Valley took over from Route 128 - Boston is Regional Advantage by Annalee Saxenian]
Posted by Unknown at 6:20 am 2 comments:

Zemanta is more than just an exotic start-up from an unlikely source. They were one of the Seedcamp winners of 2007. At the time the Zemanta founding team of Bostjan Spetic and Andraz Tori - read about them here - moved their entire team (5-6 folks including a biz dev guy who knew the ropes quite well) to London for 3 months and brought the same attitude of complete dedication in going for the total win. They used every opportunity Seedcamp gave them to expand their network, they knew exactly what they wanted and who they wanted to meet.
One of their meetings was with Scott Rafer (Lookery) (who sold Mybloglog to Yahoo) and Oren Michels, of Mashery, who have helped them ever since.
Now Reuters have done a video piece on the company, helping further raise its profile and new releases of the software and new partnerships will be announced soon.
One to watch - and to use, if you create content.

Bostjan and Andraz have hired Bostjan's brother, the experienced Ales to head the company and he has been spending lots of time on the the West Coast, East Coast, all coasts spreading the Zemanta words and striking partnership deals.
Best of luck chaps!
Zemanta is backed by Eden and TAG.
PS: I will be spending the month of June in San Francisco and hope to do my little bit for Zemanta while I'm there.
Posted by Unknown at 6:39 am 3 comments:

Reminder: There is exciting stuff happening in Europe

This piece by Reuters is a reminder to the tech investment community that there is good tech innovation coming out of Europe.
Saul's interview draws attention to Seedcamp and the other initiatives.
Lets hope that the current slowdown and change in general investment sentiment does not filter down too strongly to the start-up zone where companies still need decent length runways to establish themselves.
Despite the lower cost of getting tech companies off the ground and the measurable and effective marketing routes available, great companies will still take time, effort and capital to build build them. Patience and persistence is called for.

Posted by Unknown at 1:12 pm No comments:

Have fun spotting fakes - with Koodos

Go to Koodos for authentic top brands at great prices.
Posted by Unknown at 10:06 pm 1 comment: 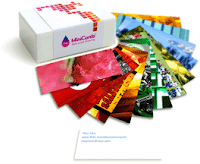 Congratulations to Richard and the team at Moo for being nominated in the retailer category and winning the people's voice Webby award in the services category.
Moo is only one of 5 website winners from the UK this year - the others being: FT, Wagamama, Transport for London and the Discovery Channel.

Its great to win awards from knowledgeable and eminent judges but getting the most votes from an admiring (or loving, in the case of Moo) public is the real accolade.

See what Moo's customers think of the award.
Posted by Unknown at 10:49 am 3 comments: