Congratulations to Mark, Keith and the team at Moveme! This is a real accolade. They were up against some very stiff competition. Also shortlisted were Oodle and Viagogo.
I report from NMA verbatim below - the links are mine.
Best New Business
"Moveme.com is a specialist website providing a support and planning service for home movers. Its objective is to be involved with 20% of the approximately 500,000 house moves a month.

Launched in June 2006 as themovingserivce.com, the site was rebranded and relaunched in January 2007 as moveme.com. The company has attracted strong backers including venture capitalist firm Advent Venture Partners, seed investor The Accelerator Group and serial entrepreneur Brent Hoberman.

The site features a resource for the booking of removal services, utility suppliers and the automatic generation of letters informing appropriate parties of your change of address. Moveme is launching an active push in brand-building and awareness campaigns over the summer, but currently the only spend beyond software development is in the form of PPC with Google and partnerships with Findaproperty.com. Moveme.com also intends to launch a nationwide marketing, PR and viral campaign to drive traffic to the site and establish it as the main player within the online property moving market space.

Currently moveme.com caters predominantly for purchase moves, but is in the process of developing solutions and software specifically targeted for rental and student moves. The company also plans to offer a white-label service to compliment the existing web strategies of the leading estate agents and property portals.

According to a recent GP Bullhound Research report covering the online lead-generation sector, the home-move market will be worth in excess of £2bn globally in 2007. This is a growth rate exceeding 70% annually, making it the fastest growing segment of online advertising.

The judges said that the service had a great interface and practical useful tools, and that it was clear where the founders were driving the business as a facilitator."

Oodle was launched in US in early 2005 but is new to the UK and Viagogo is a UK version of Stubhub in the US.
Moveme is an original and clever solution to the universal challenge of moving home.
Posted by Unknown at 8:54 pm No comments:

Wonga.com came out of stealth mode on Thursday at the Library House Event, Essential Web. Wonga offers same day cash to borrowers. In fact the alpha trials demonstrate that transferring cash to approved on-line applications should take no more than 30 minutes.
The system that Errol Damelin, Jonty Hurwitz and the team have developed has about 20 complex system integrations but using the power and speed of the web makes the whole experience for the user clean, simple, clear and quick.
Wonga is a simple solution for personal debt management, designed for anyone who occasionally wants a short term, unsecured, same-day cash loan to help them out when unexpected expenses or urgent cash requirements arise.
Wonga aims to build social contracts and trust ratings with all its customers, as well as carrying out standard and innovative credit checks. Once their trust rating is fully established, Wonga allows its customers to borrow up to £1,000 at any one time.
We also announced the first funding round of $6m for Quickbridge Ltd (the owner and developer of Wonga.com) by Balderton Capital (formerly Benchmark Capital Europe).
Read some of the blogs referring to the announcement here: mashable, e-consultancy, venturebeat and P2P Banking
Posted by Unknown at 11:48 am No comments:

Daylife raises its Series A in London

Upendra Shardanand's Daylife in which TAG was the largest seed investor back in July 2005, has raised $8m from Balderton Capital (previously Benchmark) and Arts Alliance.
See FT.com's coverage.
The company's news aggregation tool, which sits on partners' websites, allows customers to search for a term and see results from articles, blog comments, pictures and other online sources displayed similarly to a newspaper front page rather than the results lists favoured by Google and other search engines.

This round brings the amount raised for Daylife to around $11m.

Ynon Kreiz of Balderton and Adam Valkin of Arts Alliance said the group had sought European financing because it was a global business with customers on both sides of the Atlantic.

From the outset, Upe and his team have determinedly positioned Daylife as global with its news gathered from every corner of the world and seeing it from every angle.

Upendra was one of the founders of Firefly, an early online community site and recommendation engine sold to Microsoft in 1998.
Posted by Unknown at 8:10 am 1 comment:

Can Getty do for music what it does for images?

Getty Images are going to start making a real difference to the way in which film, TV and web creatives source their music in future.
In our multimedia world with digital content being becoming richer all the time and being distibuted across so many platforms, Getty has made what looks like a profound strategic move. They announced the acquisition of Pump Audio last week for around $42m.
For years, Pump Audio has been providing major media companies such as MTV, NBC, CBS and the BBC with a proven, legal way to access great independent music for their commercial productions.
Getty will help Pump make this same licensing solution directly available to everyone.
Getty Images now has a platform that allows customers to license pre- cleared, original professional quality music to enhance their broadcast, film, video, advertising and online projects. The music will, over time, be integrated into the various web sites of Getty Images, as well as being made available by the sales force of Getty Images.
"Getty Images has powered the forward momentum of the visual content industry over the past 12 years, delivering most of the major innovations and bringing new opportunities to our partners and customers. Today there is wide agreement in the music industry that the market for commercial music licensing is fragmented, inefficient and confusing, just as the imagery market once was,” said Jonathan Klein, co-founder and CEO of Getty Images. “We are confident that bringing our digital distribution, e-commerce expertise and our customer relationships, as well as our understanding of intellectual property, to the music industry will have a similarly positive impact.”
There have been a series of moves on Getty's part to expand beyond photography and into the digital media sector. Last month, it launched a new division to license video footage and other multimedia content, and over the past few months has made a string of acquisitions, from amateur photography site Scoopt to fast growing photographer driven portals like iStockphoto.
Posted by Unknown at 1:05 pm No comments: 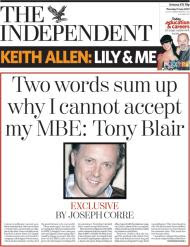 No sooner had I posted with pride the recognition that Agent Provocateur had received in the award of MBEs to the founders, than Joe Corre decided that he didn't want his. What followed was a tsunami of media coverage the likes of which brands cannot buy.
The entire front page plus page 2 of the Independent plus every other major newspaper plus news at ten on the BBC etc etc. Our press office received dozens of interview requests and emails through the website (most by far supporting Joe's views) came flooding in.

The fact that Serena was delighted to accept hers and that Joe made clear these were his views and not the company's has helped the brand's positioning significantly.
Agent Provocateur's brand is a blend of Joe's anarchism and Serena's style and glamour.

Business and politics don't mix ...come to think of it nothing much mixes well with politics.
Posted by Unknown at 6:48 pm No comments: 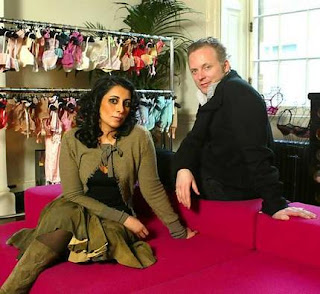 What a wonderful tribute to Joe and Serena to be appointed MBEs for their services to fashion in today's honours list.
They started Agent Provocateur in 1994 from a tiny store in Broadwick Street, Soho. "When we began Agent Provocateur we wanted to create this beautiful place that only existed in our imagination. We had always hoped something similar existed somewhere else, but it didn’t."
Rees and Corré introduced their vision of lingerie avoiding the prudery that insists on categorising anything to do with sex as sleazy or smutty. The aim was to create an availability of high quality designer lingerie with creative flair.
TAG invested in 2002 when the company had 4 stores and was about to open in New York.
Today we have 29 stores (20 own stores and 9 franchised) in 13 countries with many more planned.
The website has been named "the world's sexiest site" by Vogue and it is the company's largest single store - outstripping Selfridges London, New York, Las Vegas and the rest.
AP's most recent award was for New Fragrance of the year for Maîtresse given at the Fifi awards in April. The FiFi Awards are put on annually by The Fragrance Foundation to honor the fragrance industry's creative achievements and is considered the 'Oscars' of the fragrance industry. 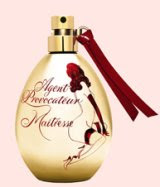 The couple are supported in the building of the brand by an oustanding management team built up over the last 5 years who are infused with passion for the brand and what it stands for.
Posted by Unknown at 6:09 am 1 comment:

Saul on why Europe needs to keep seeding

Saul Klein was one of the speakers at the recent NextWeb conference in Amsterdam. His theme was one that is talked about regularly in the Euro tech venture scene. It co-incided neatly with the LastFm exit helping re-inforce Europe's credentials in enabling the creation of global tech companies
Take a look at Fred Destin's blogpost on the subject.
In addition to the debate, there is a lot of practical action going on. In case you haven't noticed, The Open Coffee Club, started by Saul is now an international phenomenon.
Now established in 50 cities in the world, it was envisaged only 14 weeks ago as a means of stoking the European ecosystem. London alone has 579 members.

Saul's presentation at NextWeb is here.