Moo celebrates one year in MooStyle

It was a party disguised as a product launch - or is it the other way around?
In typical Moo fashion they organised a MeetUp in SF on Tuesday where an "exhibition of cool MOO stuff, loads of freebies, a rockin' DJ and drinks" were available.
to customers, partners, friends and fan of MOO.
Following the success of the moo minicards, the company has launched the Moo NoteCard. This clever bit of paper design is a greetings/note/invitation/ card which can be mailed (16 envelopes provided in the pack of 16 cards) or desk displayed using the folded section.
Of course, the NoteCard can be fully personalised by uploading pictures or graphics from your hard drive or Flickr stream.
Posted by Unknown at 12:05 pm No comments:

Royal Mail benefits from the Web

While email is killing - or has killed - peer to peer letter communication, many web companies seem to be more than making up for the damage.
Amazon has given an enormous boost to the Royal Mail's parcel delivery service but the biggest impact to its letters business has undoubtedly been the on-line DVD rental services.
The Evening Standard's This is London in a piece about film state that "LoveFilm will reportedly soon become the Royal Mail's single biggest client".
Personally, I am a little sceptical of this statement the source of which is not attributed.
Yes, with an estimated 1m discs going to and from LoveFilm (Royal Mail gets paid there and back) each week its pretty good business for Her Majesty's postal service.

Royal Mail delivers 84 million items every working day and has a network of 14,376 post offices. Revenue for the year was £9.056 billion, and profits before tax were £312 million.
Posted by Unknown at 11:09 am No comments:

The Local Globe in action 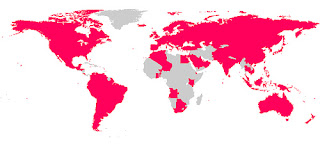 When Saul coined the name LocalGlobe he showed profound understanding of the web.
We are seeing some really exciting examples of how this all works in practice.

Stardoll [for those unfamiliar, watch eNews on the Stardoll phenomenon], is now available in English, German, French, Spanish, Italian, Polish and Hungarian. A look at the Alexa rankings for Stardoll shows how the effort of localising is paying off.
Another great example is TAG's latest announced investment, Netlog.
Netlog is the least known of the social networking giants see LocalGlobe's brief piece on it recently and the press announcement of the Index led round.
Countries where Netlog sites have been established include UK, Spain, Portugal, France, Holland, Belgium, Germany, Italy and Romania and there is a real local flavour to each. You'd expect a user generated site to be so but Netlog have really facilitated this process.

It will be interesting to see how Imagini evolves since it uses few words and images tend to be fairly universal in their interpretation. Certainly the 2m VisualDNA profiles which Imagini have collected will throw up some interesting national differences.

Little Moo has not started localising but the comment from one of their customers, Dennis Howlett says a lot:
"Along with a certain scepticism that I might not receive the product given I live in the back of beyond.
Imagine my surprise when my Moo cards turned up - exactly on time.
Although Moo is a tiny company, it has reached 143 countries. A perfect example of the Global Microbrand."

In the big Euro/Valley debate the one advantage Europe and London in particular has is its awareness and readiness to internationalise and localise.
Of course localising is not simply a question of translation it often implies local customer service and cultural nuances.
As broadband penetration grows globally, we are truly seeing the WORLDWIDE WEB emerge.
Let me know of other Euro companies really doing a great job at localising...
Posted by Unknown at 3:49 am No comments:

A relatively low key part of the TAG portfolio, Digivate is demonstrating clearly that deep domain knowledge wins in the eCommerce agency space. The founders, Lysander, Will and Mark were all schooled in direct-marketing, database analysis, catalogues and merchandising while at Innovations together. They were all involved in Innovations doing the first UK consumer transaction on the web in May 1995.
They left to set up Digivate and built an eCommerce platform using open source technology. This proved to be a great long-term decision. It was tough in the early years to persuade larger clients who wanted IBM or Microsoft platforms. Not today!
Digivate has expanded its offer from Managed eCommerce service to eMarketing in all its manifestations and their deep knowledge of how to get and keep customers and how to drive conversion, analyse email marketing campaigns really does deliver.
Their latest client is the Pier - site by Digivate not yet released.

Their etails newsletter is worth reading if you are interested in eCommerce - they always have interesting observations about what is happening in the US and they watch the multi-channel retail scene closely.
I'm delighted for the team that they are growing so well, are very profitable AND that they are paying their shareholders good dividends!
Posted by Unknown at 3:45 pm No comments: