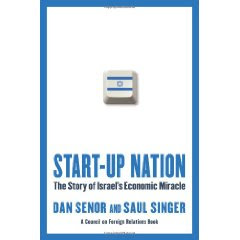 I have just finished reading Start-Up Nation a new book by Dan Senor and Saul Singer....thanks Saul and family (Klein).
It is a fascinating read with clear messages for anyone interesting in entrepreneurship, anyone who is fascinated by the way in which innovation can drive economic success and particularly to those of us with a profound belief that technological innovation is one of the essential planks for recovering economies.
Israel has stood out among advanced economies as a place where the crisis hit softer, and may have passed quicker, than almost anywhere else. Israel's economic growth has not been based on easy credit or a real estate boom, but on the technology-driven productivity gains that many believe is key to sustained economic growth.
All this has taken place in a tiny little country, with no natural resources - other than its people.
The authors put forward a number of theories for why it should be that Israel - a country of 7.1 million, only 60 years old, surrounded by enemies, in a constant state of war since its founding — produces more start-up companies than large, peaceful, and stable nations like Japan, China, India, Korea, Canada, and the UK. How is it that Israel has, per person, attracted over twice as much venture capital investment as the US and thirty times more than Europe?
Israel has more companies on NASDAQ than any country outside the US – more than all of Europe, India, and China combined. Nor is Israeli innovation limited to computers, security and communications; Israel leads the world in medical device patents and is a global player in cleantech and biotech.
The book explores elements of Israeli culture: the determination, persistence, the questioning and challenging of authority - which have led, in part, to this phenomenon. The intersection of scientific exploration and the military imperatives are also thoroughly analysed.
Full of interesting facts and fascinating anecdotes, Start-Up Nation sometimes reads like a pitch for investment in Israel.
For us, in the UK and the rest of Europe, there are some clear lessons. Tolerance of and active learning from failure (Israel has more failed start-ups than elsewhere, too) is something we are seeing more of in the UK. Thinking global from day one, challenging accepted modes of doing things are a couple of other aspects of the approach which we could readily adopt.
Another major ingredient of Israel's start-up culture is openness to new immigrants, who are natural risk takers. Israel is home to some 70 different nationalities, including Jewish refugees from Russia, Ethiopia, Iran, Ukraine and Poland - and the Israeli government has implemented unique policies to assimilate them. Two out of every three Israelis are newcomers or the children of immigrants.
Encouragingly for the UK, the ease with which London, in particular, absorbs and makes welcome immigrants is helping to turn it into a European centre for entrepreneurship.
One gets the sense, reading this book, that we may just be at the beginning of the start-up phenomenon. Lets hope so.
Posted by Unknown at 4:22 pm No comments:

In thinking about today's inaugural Seed Summit (a Seedcamp initiative), I did a quick canter through the last 10 years of angel/seed investing that we have done at The Accelerator Group (TAG).

We've invested directly in about 64 companies.
The current portfolio is listed alongside here.

These can be further analysed as follows:
Of the 10 sold, 4 were at 10X or better; 3 were 3X or better and 3 were at a loss
The 12 closed were total write-offs for us.

Of the 42 still active:
11 have reached EBITDA breakeven - or better
31 have yet to get there.
Of these, 9 are pre-revenue.

Seed and angel investing are fundamental to the health of the start-up eco system. VCs provide the bulk of the cash but seed investors fund the bulk of the companies.
27 times as many companies are seeded by angels in the US than by VCs according to Basil Peters