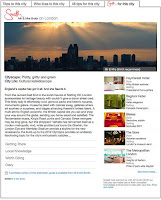 Dopplr is a service created for frequent travellers who belong to the same social, business or industry network.
If you travel a lot to conferences, meetings or otherwise its amazing how frequently you find that someone in your network happens to be in the same city at the same time - or perhaps you'd miss by a day or two.
The Dopplr site was built early last year and
about 500 heavy travelers from technology and media companies were invited to
road test the software. Since the Dopplr users were logging thousands of air
miles a month, the site quickly became the place for wired
globe-trotters, many of whom are now hooked on checking each others'
movements.

The site is now open but of course permission
to view another member's itinerary is by invitation only.

The service has attracted a lot of attention including a nice piece in Time magazine and is now being adopted by some large corporations as a way of optimising 'face-time' between their wide travelling executives.
Now Dopplr have added a superb, fully integrated partnership (through to booking) with the Boutique Hotel group - Mr and Mrs Smith.

The Hotels recommended by Mr and Mrs Smith may not meet everyone's budget but the direction which Dopplr are going is clear - great functionality for the user and smart monetisation of a super service.
Great job, guys!
Posted by Unknown at 11:51 am No comments:

Yesterday the OFT gave the go-ahead for LoveFilm and Amazon to merge their DVD rental operations. Whilst most people expected this, it was by no means a 'slam dunk'.
The OFT said that while it had competition concerns about the merger, which will control 90% of the online DVD market, it concluded that LoveFilm had no incentive to worsen its customer proposition because of the competition it faced from an array of other providers of video content.
LoveFilm in the UK and Netflix in the US have once again demonstrated the power of the web to disrupt well established and entrenched business models - in this case the Video Rental stores.
Lovefilm's CEO Simon Calver says the high street film rentals market has "completely imploded" with 50 per cent fewer stores trading today than two years ago as consumers continue to flock online to hire their movies.
Speaking at the First Tuesday 'Retail Revolution' event in London this week Calver said there are simply more attractive options online for film fans, with the internet now accounting for 45 per cent of the total rentals market, as it provides a platform for more choice, greater convenience and better value-for-money.
Although LoveFilm will have 90% of the DVD on-line rental market after the merger, the OFT clearly recognises that the next disruptive wave could be coming from downloads and other VOD channels.

Read previous TAG posts connected with LoveFilm
Posted by Unknown at 6:51 am No comments: