Wonga puts its head above the parapet

Wonga set out to fundamentally change the way in which short term credit was accessed by borrowers. Although never articulated, it aspires to go much much further by using technology to radically alter a raft of financial services - putting control in the hands of consumers.
Banks have never been well regarded by their customers - long before they were ever seen as the villains in the credit crunch.
They have been seen as impersonal, heavy handed, slow and cumbersome. 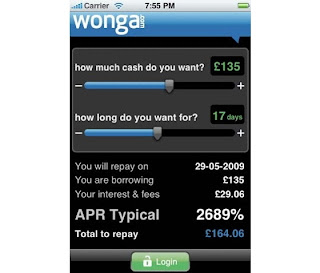 The opportunity surely exists for a whole new approach to banking and financial services.
Clearly, Virgin in the UK are seeing this - as are many others.

Payday lending, doorstep lending and similar short term services have existed for some time. Wonga decided to start there - believing that there was an ethical, customer friendly and efficient way of tackling this market. People will always have the need for short term cash to deal with unexpected bills, unintended overspends - or shortfalls in income.

The vision was simple and clear - the execution anything but.
Applications for loans would be processed in in real time by a sophisticated risk engine - using thousands of data points, applicants identity would be verified - again in real time - by the triangulation of data. All this would happen 24x7x365 and funds transferred into the customer's bank account within the hour.

Wonga has  now processed over 100,000 loans - accepting about 20% of new applications.
Customers love the service and Wonga has the highest NPS (Net Promoter Score) - which it constantly monitors of any company with which I have been associated.

Of course, the interest charged for this service was always going to be controversial. There is no way around having to prominently display a typical APR of 2689%. The law requires it.
APR is a measure intended to 'normalise' loans so that rates can be compared. Of course, it is an absurd measure for loans intended for repayment in no more than 30 days - just as quoting a cab ride as £x per mile would be.
Wonga decided that one of its fundamental principles was transparency, openness and simplicity. Therefore what was most important was showing exactly how much has to be repaid for any variation of loan.
For example, borrowing £100 for 12 days will cost £17.99. Not cheap, but clear.

The alternative of taking the money from your bank - in the form of an unauthorised overdraft typically costs a lot more and has been the subject of protracted legal challenges (which the banks have won).

Knowing that once Wonga became a significant player in this market, that it would be controversial, they decided to 'go public' with their iPhone application - a really neat and simple app which, true to its mission, puts the control, ease, accessibility of the service in the hands of consumers.

Wonga has managed to do what no other company has been able to in the world of short term loans and the worlds media have recognised this. CNN, BBC, Sky and the rest have all recognised the significance of this company. [See below]
The APR will continue to polarise opinion and provoke those who feel that credit is itself undesirable - meanwhile Wonga will continue to dedicate itself to great customer service and will continue to innovate in the financial services space.
Congratulations to Errol, Jonty and the awesome team at Wonga!

Sky News – no sign of the video online as yet, but may appear here, in the Unplugged section -http://news.sky.com/skynews/video

TechCrunch US article from the night before - http://www.techcrunch.com/2010/01/14/is-the-internet-finally-robbing-the-greedy-financier%E2%80%99s-gravy-train/?utm_source=feedburner&utm_medium=feed&utm_campaign=Feed%3A+Techcrunch+%28TechCrunch%29