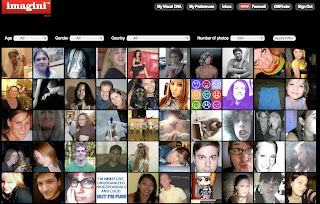 Imagini the company that introduced or 'created' visual DNA with such compelling effect has announced its Series A funding round.

Imagini definitely falls in the 'intriguing' category and a year ago left many potential funders scratching their heads as to where the company would ultimately go.

By April 2m users had completed their visual profiles in a matter of months (now well over 4m) and Imagini was seen in a somewhat different light and wrapped up a very interesting group of investors fairly quickly.

Now Imagini has developed a super facebook application called Youniverse which promises further engagement with the concept of visual DNA.

Victor Keegan has written intelligently about the company in the Guardian. This is worth a read if you're still scratching your head.